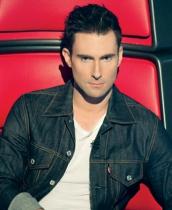 ) was giving birth to their first child.

"Remember to eat. A large percentage of new dads pass out because they forget to take care of themselves and don't nourish their bodies with food and faint a lot of the time," Levine told Kimmel about the advice Carson Daly gave him.

"What I discovered about myself is that I'm a nervous eater. So she kind of went into labor throughout the day, and it was beautiful. I was eating a lot though. We finally go to the hospital, I've put back an unbelievable amount of food."

"Like basically bursting at the seams, I was gonna shit my pants," Levine recalled.

"Also, my wife is in labor and it's the lamest thing to be when your wife is going to be having a baby and you’re like 'I got to take a shit.' That's not, in any way, a viable complaint. So you got to keep it inside, literally and figuratively. It was brutal."

"I waited, doubled over in pain. Finally, the baby came it was beautiful and amazing. And the second coast was clear, I took one of the nurses aside and I was like, 'Look you got to find me a bathroom.'"