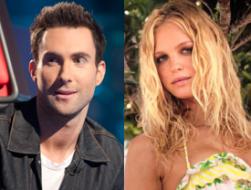 ), who split earlier this year, are back together and engaged.

"Adam Levine and his girlfriend Behati Prinsloo are excited to announce they are engaged to be married," 'The Voice' judge's publicist confirms. "The couple recently reunited and Adam proposed this weekend in Los Angeles."

The Maroon 5 frontman hasn't been shy about going through models like a deck of cards. In an interview with Details magazine, Levine said it was simply because he loved women.

"There's two kinds of men: There are men who are f--king misogynist pigs, and then there are men who just really love women, who think they're the most amazing people in the world. And that's me," he said.

"Maybe the reason I was promiscuous, and wanted to sleep with a lot of them, is that I love them so much."