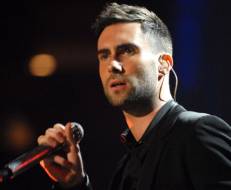 Adam Levine tells Jimmy Kimmel about the odd moments he's had while performing onstage with Maroon 5.

'The Voice' judge also recalls the recent incident in which a mic he threw to the floor bounced and hit a female fan in her face.

"I threw my microphone down a foot in the ground in front of me and it took this incredible once in a lifetime hop. It really shoots in this forward very, very quick motion that nails this girl. I saw it like it was in slow motion. Right when I dropped it I thought it's going to kill somebody."

Levine says he immediately hoped the girl was fine and wasn't planning on hitting him with a lawsuit.

"I thought 'Oh my God, this poor girl. Is she going to be okay because she's just been struck in the face with a microphone?' and immediately I was thinking 'Is this going to be a lawsuit kind of situation?'"