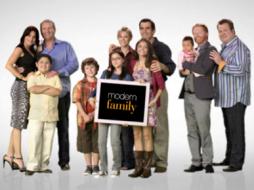 The series, which has earned 22 Emmys over its eight seasons, will return for its ninth and tenth seasons with the option for more.

"Modern Family has been the centerpiece of our comedy brand for 8 seasons and we are thrilled to have it on our schedule for two more years," says ABC president Channing Dungey. "Steve Levitan and Christopher Lloyd have created such endearing characters, and the cast is second-to-none."

"We are beyond thrilled that we get to spend more time with these characters, these amazing actors, our ridiculously-talented writers and our incredible crew - all of whom are like family to us. And the good kind of family, not the kind that argues with you all the time," adds Levitan.

"There is so much more to explore in the lives of this family, and so many pressing needs in the lives of our own actual families to go on ignoring, that this timing could not have worked out any better," jokes Lloyd.