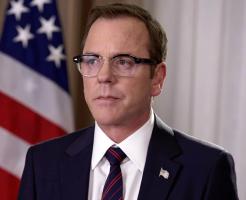 ABC has ordered full seasons of 'Designated Survivor' and 'Speechless'.

'Designated Survivor' stars Kiefer Sutherland as a low-level cabinet member who is pushed into the presidency after a terrorist attack wipes out most of the United States government.

Meanwhile, Minnie Driver stars in comedy 'Speechless' as the mother of a family with a special-needs child dealing with challenges and creating new ones.

"Designated Survivor and Speechless are two of the most critically acclaimed new shows of the fall season," says Channing Dungey, president of ABC Entertainment.

"We're very proud of the creative excellence in front of and behind the camera, and are thrilled to be giving our audience more episodes."

Both new shows have performed well for the network. It joins NBC's 'This Is Us' as freshmen shows with full season orders.