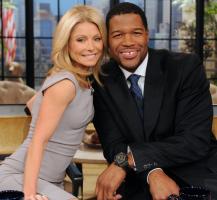 ABC President Ben Sherwood admitted in a recent interview that the network bungled Michael Strahan's exit from 'Live with Kelly and Michael' earlier this year.

"I have most definitely thought about it, and I think that enough has been said about it," he tells THR.

"We made some mistakes, we fixed them quickly and we moved on."

"I was on the set of Live recently," he adds. "The show is in great shape, Kelly is in a great place, the hunt for a new co-host is underway, the excitement is building, and I believe the future of that show is bright."

Ripa famously took a leave from her own show after discovering she was the last one to find out about her co-host's exit.

Even the 'Good Morning America' team had been made aware than Strahan would be joining them before Ripa was blindsided with news that he was leaving the daytime talker.

"Our long national nightmare is over," she joked in her return following an apology from ABC.

"I first want to honestly, sincerely thank you for welcoming me back to the show. The show of support through this bizarre time has been really overwhelming."

"I really — I needed a couple of days to gather my thoughts after 26 years with this company. I earned the right, and let’s be honest: I know half of you called in sick to be here, so we get each other."

'Live' is still searching for a permanent replacement. It's no secret that she would like close friend and CNN anchor Anderson Cooper to land the job if his schedule permits.