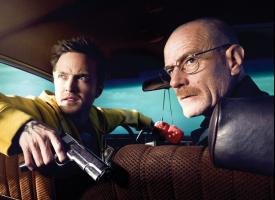 Aaron Paul is stoked about 'Breaking Bad' iconic meth suits making it to the Smithsonian.

"The Smithsonian now has two of our meth suits in their hallways and I could not be more excited about that fact. I mean they have the hope diamond, Lincoln's top hat and now a bunch of really cool items from the greatest TV show of all time," Paul says.

"Yes, I may be a little biased but I am also very proud," he adds.

Paul played Jesse Pinkman but most of the show's cast and creators were on hand at the National Museum of American History Tuesday to donate show memorabilia.

"That man standing up there at the podium is the reason this show exists. Vince fu---ng Gilligan. He is the reason I have a career and I will be indebted to this man until my dying breath. This show was a success because of you," he said. "Simple as that."

"We needed our audience to believe in us and that you did my friends. Breaking Bad is now in the Guinness book of world records as the highest critically acclaimed TV show in history. That is absolutely INSANE. To all of you, Thank you."

The suits, gas masks, and Heisenberg's hat are just a few of the items that will make up the show's memorabilia at the museum.

For his part, Gilligan joked: "If you had told me there'd be crystal meth in the same museum as The Star-Spangled Banner, Thomas Edison's light bulb, Abraham Lincoln's pocket watch and Dorothy's ruby slippers, I'd have told you that you were using too much of Walter White's product."