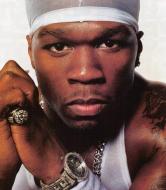 Jay-Z's '4:44' album may be making waves, partly due to the content that includes him admitting to cheating on Beyonce.

However, 50 Cent isn't impressed and is comparing his friend's tunes to "golf course music."

"I felt like I was supposed to be wearing glasses and s--t, and tie a f--king sweater around my waist. It was like Ivy League s--t."

"I ain't gonna hold you up. Some of that s--t was like golf course music," he said plainly.