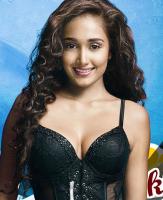 Young Bollywood actress Jiah Khan has been found dead at her home in Mumbai, India.

The body of the 25-year-old actress was found in her apartment in Mumbai's Juhu neighborhood late Monday, according to police.

According to several reports, Khan was found hanging by her mother and apparently committed suicide.

Unnamed sources close to her told the Indian press: "She had been depressed for some time due to personal issues, but was keen on returning to acting soon. She was also meeting filmmakers regarding projects."

Khan, who was born in New York and grew up in London before moving to Mumbai to pursue a career in India's biggest film industry, began her career in the 2007 Hindi film 'Nishabd' opposite star Amitabh Bachchan.

She was most well known for her role in the 2008 film 'Ghajini'. However, perhaps as a sign that things weren't all right, Khan had not appeared in any films since she took on a supporting role in the 2010 comedy 'Housefull'.