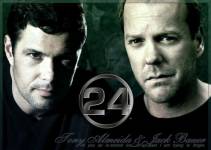 Carlos Bernard, who played Tony Almeida on '24', has been cast as a wealthy season-long villain on the upcoming season of 'CSI: Miami'.

"There will be a very high-octane relationship between the two. A hero is as heroic as his opposition is deadly, so we're really going to go there with this character."

"We're going to discover that over the course of the season that they may be pulling a lot more strings politically than meets the eye," O'Brien hints of the character's family.

"That will be a driving theme through season 10 — that Horatio may not completely understand the face of evil that is facing him. ... Horatio's fight for justice might just get compromised."