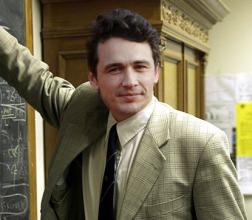 Hulu has released an intriguing teaser for its original series '11.22.63', starring James Franco.

Based on Stephen King's book, the eight-episode series, it will see Franco travel back in time to prevent the assassination of John F. Kennedy.

Franco plays Jake Epping, an English teacher living who discovers a door that transports him back to the past. He sets out to prevent the assassination of the President in the lengthy 800-plus page book.

The series is currently set to be debut on Presidents Day 2016.