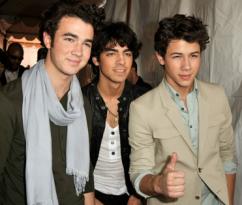 The Jonas Brothers are breaking up.

After abruptly cancelling their scheduled tour over creative differences earlier this month, the band has announced they're ending their run together.

Nick, Joe and Kevin made the announcement on Tuesday, calling it a a "unanimous decision."

"It's over for now," Kevin Jonas told People magazine.

"It's really hard to say 'forever,'" added Nick. "We're closing a chapter, for sure."

The breakup was apparently spurred by Nick Jonas.

"I was feeling kind of trapped," he explains. I needed to share my heart with my brothers."