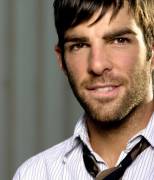 Until now there were only a rumours but now E! network reports that "the deal is about to close" and the "contract is with the business affairs team at Paramount." This is usually the last stop before it's signed off.

You may recall in December, Quinto commented: "I missed the Superman Returns boat... so I'm angling for Star Trek. People are constantly telling me I bear some resemblance to Leonard Nimoy" so maybe he had an inside track as early as then.

A worthy choice in our opinion, Quinto has already shown his range and talent on "Heroes."

The movie will be released on Christmas Day 2008.