Zachary Quinto On Coming Out: 'I Didn't Tell Anyone I Was Going To Do It' 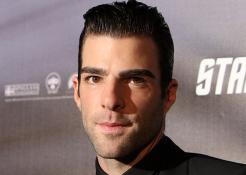 Zachary Quinto says he didn't tell anyone -- not even his agent -- before he came out as gay in an interview with New York magazine in 2011.

"I didn't tell anyone I was going to do it so no one had a chance to," the 'Star Trek' actor says when asked if he got any advice before the decision.

I just did it. Nobody in my life knew. Nobody personally or professionally knew. The one thing I was certain of, in the many years that I grappled with the issue of how or when or if to do it, one the big things I knew would be on my own time and in my own terms."

"And those were the only two things I could be sure of. Especially with an issue like that, the moment you open it up to anyone else's opinion you're in trouble. Or at least you're going to have to work harder to filter down the noise."

"So that helps that it was after the interview that I told people what I had done."

Quinto says he hasn't seen any negative effects of coming out and thinks people are generally more accepting now.

"No, none. I felt supported at the time in a really profound way, by fans and people that just know me by my work and all the people in my life whose guidance I seek," he says.

"They really supported me. I had no one to look to when I was growing up and yet I find myself in that position. There's something incumbent upon me in that situation."