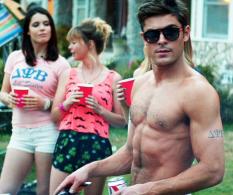 Zac Efron will star in a 'Baywatch' movie alongside Dwayne 'The Rock' Johnson.

'Horrible Bosses' Seth Gordon is being tapped to direct a raunchy comedic take on the '90s series that will team the two stars in the style of a buddy cop movie.

Johnson will play a serious lifeguard who is forced to work with Efron in order to save their beach from an industrialist.

Efron has been in demand since his turn in opposite Seth Rogen in R-rated comedy 'Neighbors'. He just completed filming road trip comedy 'Dirty Grandpa' with Robert De Niro and soon beings work on the 'Neighbors' sequel.

And you can't help but think that a shirtless Zac Efron would help the studio get women in theaters.

"Welcoming my dude Zac Efron to BAYWATCH. Our movie will be big, fun and RATED R.. Like me when I drink," Johnson said on Twitter Monday.

Johnson has been attached to the project since it entered the planning stage in October.

"'This is my beach bitch!' Rumors are true... we're making BAYWATCH the movie," he said last year. "Edgy, raunchy, and hopefully, funny as all hell. Cue slo mo running on the beach."