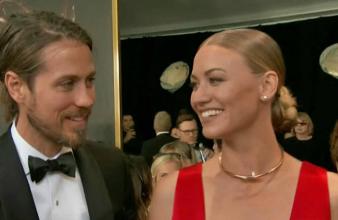 The 35-year-old Australian actress, who plays Serena Joy on 'The Handmaid's Tale' but is probably best known as Sarah Walker on 'Chuck', went on to introduce husband Tim Loden.

Yvonne explained the two, who've been together for more than six years, married earlier this summer.

The actress first met Loden on the set of 'Chuck' while filming the episode 'Chuck Versus the Honeymooners' in which he played the role of a Polish Rocker.

Following the nuptials, Yvonne said: "We ended up jumping in the lake in our suit and gown, just to cool down. It was ridiculously hot. But we had a great time."