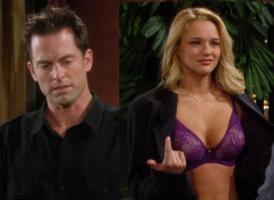 'The Young and the Restless' star Michael Muhney, who played Adam Newman, was fired from the CBS soap last month.

And now it's coming out that the reason behind the abrupt firing was that Muhney allegedly groped co-star Hunter King's breasts more than once and sexually harassed and bullied her.

The 20-year-old King complained to executives of Muhney's behavior and he was let go. Muhney had apparently been a problem on set for some time and hinted at the fact in an interview after being fired.

"I saw it coming, and I didn't see it coming," he said. "I suspected it could happen, but I didn't think that it really would. Part of me feels this is because I've always been outspoken, and sometimes I've been too outspoken. Sometimes I've walked around with a big backpack full of hubris. That is entirely on me."

Muhney's final turn as Adam Newman, which has already been filmed, will air at the end of this month. His character will return with a new actor after a short absence.