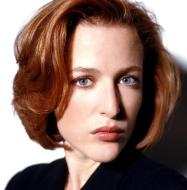 The 44-year-old actress will play will play Dr. Bedelia Du Maurier, the therapist of Dr. Hannibal Lecter for multiple episodes in the series based on the ‘Silence of the Lambs' villain.

"Every therapist needs their own head examined and we are ecstatic that Gillian Anderson has chosen Hannibal to mark her return to American television after 10 years to portray Dr. Lecter's personal psychiatrist," says creator and executive producer Bryan Fuller.

"Her intelligence and sophistication, not to mention her pedigree of groundbreaking TV, make her the perfect actress to match wits and psychological manipulations with one of the greatest villains of pop culture. I couldn't be more excited."

Although no official date has been announced, it's expected to premiere sometime this spring.