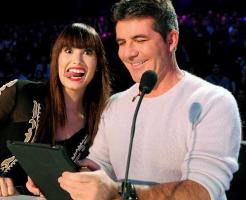 'The X Factor' wrapped up its third season on Thursday night.

Lovato, who announced earlier this week that she would be leaving the show following this season, was mocked in a pre-recorded segment that proclaimed she had been drinking "all-natural annoying juice" at the judge's table all season.

Lovato was less than amused by the clip, which also featured a can covered with the label for the drink.

"That's f--ked up," she could be seen mouthing repeatedly to Cowell, with her audio muted but reaction video visible in the corner for the segment.

Asked for a response, she told the crowd: "Well, Simon, I think it's very, very clear that since I don't drink anymore, Annoying Juice is what I do drink, and I love it, because I get to annoy Simon with it."

As for the competition itself, Alex & Sierra, one of Simon Cowell's Groups, was crowned the winner during the two-hour finale.