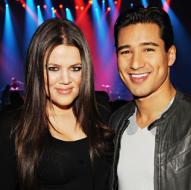 Two weeks after we reported it was a done deal, Fox has officially announced that Khloe Kardashian (photos

) and Mario Lopez are joining 'The X Factor'.

The 'Extra' host, who is a 'Saved by the Bell' alum, and the 'Keeping Up with the Kardashians' co-star will make their first appearance as hosts of the talent competition next month.

"Mario and Khloe are our hosts," judge and executive producer Simon Cowell said in a statement. "They will debut on our first live show in November and I couldn't be happier."

"I'm very excited to be joining The X-Factor team," says Lopez. "I love the show, and I've been a big fan of Simon Cowell and the judges for a long time. Khloe and I have been friends for years and I know we'll be a great team and have a blast."

"I'm so thrilled to become a part of The X-Factor family," adds the Kardashian said sister. "I've been a big fan of the show and look forward to working with Simon and all of the judges. It's going to be so much fun!"

The current second season of 'The X Factor' is performing better than its first, but NBC's 'The Voice' continues to perform better. Last week, nearly 25% more viewers tuned in for 'The Voice'.