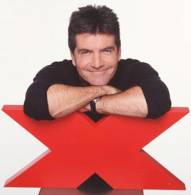 The much-hyped series premiere of 'The X Factor' debuted to numbers well below expectations last night.

And that has to be a disappointment not only for Simon Cowell, who predicted his new show would be the highest rated show on television, but for FOX after the millions of dollars it spent on marketing the show.

But only did 'X Factor' premiere well shy of 'American Idol' numbers, it also lost viewers throughout its two-hour run and placed third in the 9 o'clock hour behind 'Criminal Minds' and 'Modern Family', which was the night's top-rated show.

'X Factor's 8.7 overnight rating was almost 40% lower from the 14.2 rating garnered by the 'American Idol' premiere in January. In fact, it was only 18% higher than Zooey Deschanel's new comedy 'New Girl' Tuesday night.

FOX may still win the night in the advertiser-coveted 18-49 demographic but it will be a close race with 'Modern Family'.

"If I didn't think we could -- and its not just 'Idol', it's any show -- we don't enter something for the silver medal," said the extremely confident Cowell in August. "You do it because you want to be number one, and for the next few months we are going to throw everything at this to try and make it the best show on TV."

That could still happen but it will be a long road to the top for 'The X Factor'.