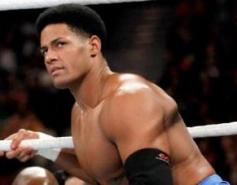 WWE Star Darren Young has announced he's gay in an interview with a paparazzo at Los Angeles airport.

Young made the statement after he was asked whether a gay wrestler could succeed in the WWE.

"I don't think it matters. Does it matter? Does it change what you think about me?," he asked.

As for whether it affects his work, being a highly physical contact sport, he added: "We're all adults. All sports are physical. When I come to work, I come to work. This is a business. I'm a WWE superstar. I'm there to entertain. That's what my job is and I do it well."

"Congratulations to Darren Young for being the first openly gay WWE Superstar!," she said on Twitter.

John Cena also weighed in: "Darren's a great guy. That's a very bold move for him. And congratulations for him for actually finally doing it. For us, it's entertainment and if you're entertaining you shouldn't be judged by race, creed, color or sexuality ... as long as you're entertaining."