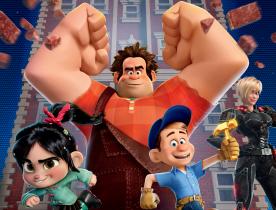 ) will reprise their roles as Wreck-It Ralph and Vanellope von Schweetz, respectively, along with Jack McBrayer's Felix and Jane Lynch's Calhoun.

"To take these characters we love and have them enter the enormous world of the internet has given us so much to explore," say directors Phil Johnston and Rich Moore.

"Our production team has been hard at work designing a world that takes something we all think we know—the internet—but shows it in a whole new, imaginative way."

"We're so excited to be working with Ralph, Vanellope von Schweetz, Fix-It Felix and Sergeant Calhoun again, and we have new characters we look forward to unveiling."

"At the center of this film, as in the first one, is the relationship between Ralph and Vanellope, two once-outcasts, who in each other, found true friendship."

The first 'Wreck-It Ralph' was a box office surprise for the studio and earned $470 million worldwide along with nominations in both the Golden Globes and Oscars as Best Animated Feature.