World's Tallest Waterslide In Kansas To Be Demolished After Death 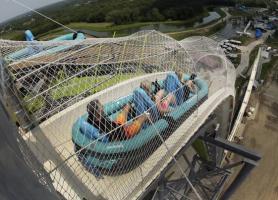 Schlitterbahn Waterparks and Resorts has announced that it will demolish its towering Kansas waterslide after the death of a boy on the ride this summer.

The action will be taken as soon as investigations into the death have concluded and court permission is granted.

The company says it took the decision not because of any legal action but because park guests were no longer confident in the safety of the 'Verruckt' ride.

In fact, a spokesperson for the company says it would've already been taken down if they were allowed to.

"When we're allowed to take it down, we will take it down. We have no interest in having it up another hour," the representative tells AP. "Coming up on the holidays, this time of year, it's something we'd like to set to rest."

The ride, billed as the world's tallest waterslide, a has been closed since 10-year-old Caleb Thomas Schwab died.

"I heard the noise, and I looked over immediately, and I saw his broken neck and him sliding down the slide leaving a blood trail," a witness told CNN. "His friend was screaming for help and I think that’s when staff members and medics and stuff started running."

The ride, that dropped at speeds of up to 70 mph, only secured riders with two nylon straps.