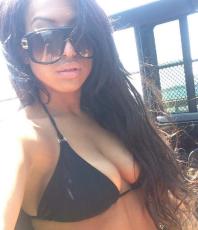 Montia Sabbag, the woman who was spotted and filmed with Kevin Hart, says she's not part of any extortion plot.

Sabbag, who admits to having an intimate relationship with the married actor and comedian, appeared with lawyer Lisa Bloom to say she hasn't asked for any money from Hart.

"I was involved with Kevin Hart a month ago,” she said. "Since then my name has been released with lies written about me. I'm not an extortionist. I'm not a stripper. I'm a recording artist and an actress and I have not broken any laws."

"I had nothing to do with these recordings. I hired Lisa Bloom solely to protect my legal rights. I am truly sorry for any involvement I had in this."

"She does not have any idea who is behind this, but she is willing to cooperate with law enforcement and give them all the information about people who may have been there, who could be possible suspects," her lawyer said. "We don't know sitting here today who it is."

Kevin Hart acknowledged cheating on his pregnant wife this past weekend after being forced into reporting the extortion attempt to authorities.

He said he "made a bad error in judgment" and "I just simply have got to do better."

"But I'm also not going to allow a person to have financial gain off of my mistakes and in this particular situation that's what was attempted."