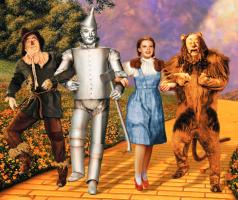 The costume that Bert Lahr wore as the Cowardly Lion in 1939's 'The Wizard of Oz' has been sold for more than $3 million.

The costume, which had been owned by Los Angeles TV museum founder James Comisar, went for $3,077,000.

Its face is a sculpted likeness of the late actor and it was made of real lion's skins.

Though several costumes were made for the film, this was the costume used in the film. A secondary costume was sold at auction in recent years for close to $1 million.

An interesting fact is that the costume had almost been thrown out by MGM at one point. It was found in an old MGM building by a junk dealer cleaning out the deserted lot in the 1970s.