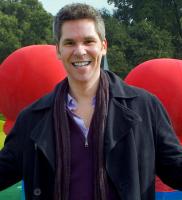 Henson said he was sitting around flipping channels with his wife when he noticed something he recognized on Cinemax.

"There is a couple having sex IN my house!", he laughed. "All of a sudden I'm going that's happening right here."

"But I found out that's the perfect way to get your wife to watch a dirty movie. She was like 'Hold on a second, I want to see if they show the kitchen.'"