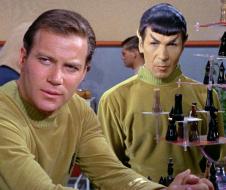 After inviting fans to "tell him off" because he chose to honor a charity commitment instead of attending Leonard Nimoy's funeral on Sunday, William Shatner paid tribute to his 'Star Trek' co-star.

"I agreed to appear at the Red Cross Bal. I feel really awful. Here I am doing charity work and one of my dearest friends is being buried," Shatner wrote on Twitter.

"I chose to honor a commitment I made months ago to appear at a charitable fundraiser. A lot of money was raised. So here I am; tell me off."

Asked if Nimoy ever kept anything from the show's set, Shatner said: "His ear tips; maybe a belt buckle."

And "if Leonard could say something to all of us--right here, right now, what would he say?," he said: "Don't smoke!"

As for any regrets about his relationship with Nimoy.

"That it couldn't have lasted a lot longer," he replied.

"I loved him like a brother. We will all miss his humor, his talent, and his capacity to love."

"I am so humbled by the worldwide outpouring of love that has been displayed; words cannot express my feelings."