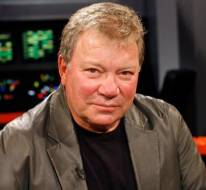 On last night's 'Jimmy Kimmel Live', William Shatner appeared during a segment in which fans were pitching ideas to JJ Abrams for 'Star Wars' to present his own idea.

"Yeah it is... because I wrote it," quipped the actor.

He also weighed in on the fans' suggestions: "But I agree with those weird people that Leia and Chewy should do it. They should do it, JJ! I've made some sketches here. Hot stuff! This is box office!"