Will Smith On 'Fresh Prince' Co-Star's Death: 'Everyone Needs an Uncle Phil' 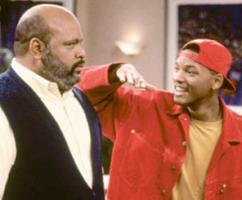 Will Smith has credited James Avery with setting him on the right path on 'Fresh Prince of Bel-Air'.

Avery, who played Uncle Phil on the 1990s hit passed away last week while recovering from open heart surgery.

"Some of my greatest lessons in Acting, Living and being a respectable human being came through James Avery," Smith wrote in a Facebook post.

"Every young man needs an Uncle Phil. Rest in Peace," he added.

Alfonso Ribeiro, who played Phil's son Carlton on the comedy, had also credited Avery for being a strong influence on him.

"The world has lost a truly special man. I am very saddened to say that James Avery has passed," he said. "Even though he played my father on TV, he was a wonderful father figure to me in life. He will be deeply missed."