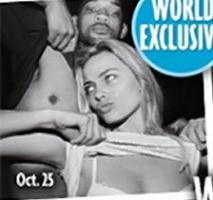 Smith and Robbie cuddle up and lift up their shirts in the photo booth photos.

The married 45-year-old actor shows off his bare chest while the 23-year-old Robbie flashes a white bra.

"Once they pulled the curtain back to take the pictures, they let their inhibitions run wild, laughing, hugging and nuzzling each other in the dark," an source tells the magazine.

The photo booth was on set to celebrate the shooting wrap up of the film. And the pair apparently forgot to take the printed photos with them.

Rumors of infidelity have long swirled around Will and wife Jada Pinkett Smith especially after she said "He is his own man. He has to decide who he wants to be and that's not for me to do for him. Or vice versa."

However, another source tells 'People' that the photos were just the co-stars "being silly."

"The whole cast and crew were there and everyone was sharing all the photos being taken. They are just friends and were just being silly. Will and Jada's marriage is fine," says the source. "Everyone there knows it was nothing."