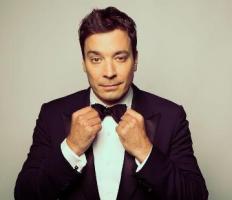 'Late Night' host Jimmy Fallon's first guests on 'The Tonight Show' will include Will Smith and U2 when he takes over the show next month.

NBC made the announcement as it described Smith as "one of the most bankable actors in Hollywood" and "twice nominated for an Oscar."

Smith next stars Warner Bros. film 'Focus', in which he plays a veteran grifter who takes a young woman under his wing. However, the film doesn't yet have a hard release date.

U2, with lead singer Bono, guitarist The Edge, bassist Adam Clayton and drummer Larry Mullen Jr, will make the appearance as it prepares to release its newest album in 2014. The 22-time Grammy Award recently won its second Golden Globe Award for best original song for 'Ordinary Love' from the film 'Mandela: Long Walk to Freedom'.

Fallon, who appreciates the early "goofy and fun" nature of 'The Tonight Show' in its early years, has said he doesn't plan to change his brand of comedy from 'Late Night.'