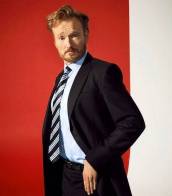 A couple of weeks ago, Will Ferrell announced he would shave off Conan O'Brien in his next appearance.

Well, Ferrell appeared on the show last night to promote his upcoming film 'Everything Must Go' and decided to correct the "huge mistake" on Conan's face.

"There is nothing else going on in this country other than the fervor to shave that beard," Ferrell joked.

Ferrell had some trouble getting off most of the bits with his electric razor but he was glad to get the 'Beardpocalypse' started.

Forward to around seven minutes in if you want to skip the intro: