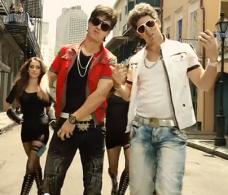 "Look at this guy - using his phone as a phone! You're phone ain't for calling, your phone is for footballin'!"

They also want you to watch football on your phone whether you're "on a date with Simone, taking out a small loan, sitting on your throne or buttering a scone."

Father Archie Manning also makes a cameo in the video, sitting on a gold throne.

"Peyton and I had fun doing the skit," Eli said before practice on Wednesday. "Obviously we got a lot of laughs together just every time we would kind of look at each other and wonder what we were doing."