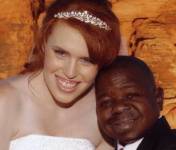 The 911 call released by Utah authorities reveals that Shannon Price, who portrayed herself to emergency crews and hospital staff as Gary Coleman's wife.

"He just got home, I heard this big bang, I went downstairs. Blood everywhere," she says in the 911 call. "I don't know if he's okay. I'm not down there right now because I have a fever, if I get stressed out I'm going to faint."

"He fell. His head is bloody. There's blood all over the floor. I don't know what happened." After the operator asks, "Is there any way you can go down there at all?" Price replies, "I'll try, I don't know, I mean ..."

"I've just been kind of sick. I don't want to be traumatized right now."

Price then is heard saying, "Gary, are you okay? Stay where you are" and "Don’t move, Gary."

The operator asks Price to tell Coleman to put pressure on his own wound.

"Gary, you have to put pressure on your wound," she yells. "He's lethargic, I can't really help him. I just need help quick."

Price says she can't drive because she's been sick with a fever.

After the operator pleads "to at least give him a towel," so Coleman can apply pressure to his wound, Price replies, "Yeah, I'm just panicked. I don't know what to do. I just don’t want him to die. I'm freaking out."

"Send someone quick because I don't know if he's like gonna be alive cause there's a lot of blood on the floor... I'm gagging, I got blood on myself, I can't deal."

The crew who arrived at the house asked Coleman if he could say what happened but he could not remember. With assistance, Coleman was able to walk out of the home and into the garage where a gurney was waiting.

He was taken off life support two days later after he slipped out of consciousness and doctors determined he had suffered a brain hemorrhage. Price made the final decision to pull the plug.

An official cause of death is still pending an investigation.