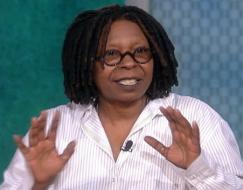 Whoopi Goldberg is blasting a fake news website that ran a story claiming that she said Navy SEAL widow Carryn Owens appeared at President Donald Trump's speech to Congress for the "attention."

Goldberg said the "horrible lie" has jeopardized relationships she has with vets and "endangered" her family's life.

The story was published by a fake news site which in the fine print describes itself as "a news and political satire web publication... often in semi-real or mostly fictitious ways."

'The View' host warns: "I'm gonna get my lawyer and I'm coming for you."