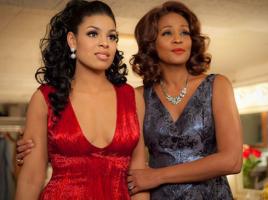 Whitney Houston's last recording, a duet with 'American Idol' winner Jordin Sparks, has been released ahead of the singers' upcoming film, 'Sparkle.'

'Celebrate', produced by R. Kelly, was recorded by Houston shortly before her sudden death in February. However, the up tempo track is not one that shows off Houston's voice as much as Sparks.

Houston sings the lower notes throughout the song and never breaks out like she did for her other hits like 'I Will Always Love You' and 'How Will I Know'.

But Sparks throws in a 'We love you Whitney' at the end of the song.