Whitney Houston's Headstone Carries 'I Will Always Love You' 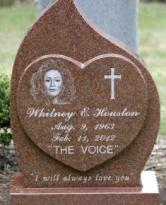 Whitney Houston's grave in New Jersey has been marked with a teardrop-shaped headstone with an inscription calling her 'The Voice'.

But, the headstone also carries the title from a hit well known to her fans: "I will always love you."

Houston made the 1994 Dolly Parton song famous after she recorded the song in the soundtrack for 'The Bodyguard'. It became her signature song. The single peaked at number one on the Billboard Hot 100 for a then-record-breaking 14 weeks.

An autopsy found she had drowned accidentally, with heart disease and cocaine use contributing to her death.