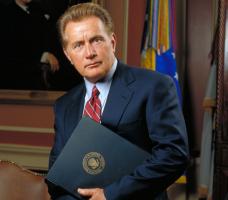 "Oh, Don Trump. He makes me laugh, in that nobody seems to get it yet that he’s an empty-headed moron," Sheen tells THR when asked about Trump.

"That he has absolutely nothing to offer us. That he's done his bidding and he has to be responsible for the damage he's already done."

When asked how could Trump have already done any damage since "just a private citizen so far," Sheen says: "Oh, come on. There’s nothing private about this guy."

"Don Trump has been around for a very long time. He's a very self-centered promoter. I think that says it."

He describes Trump as "scary" while admitting to his support of rival Hillary Clinton.

"She has some common sense," he says. "I'm not saying she’s mistake-free. Who is? I mean, she's a human being. She's been in public life for 30 years. She's made a few mistakes. Is anybody talking about George Bush and the 30,000 emails he destroyed about the weapons of mass destruction in Iraq and all of that nonsense, and how Great Britain came in, and all the other allies knowing full well that it was bogus?"

"So, please, if you want to talk about how much her mistakes have cost us, none in human lives — and please don't mention Benghazi. That's a lot of crap. She was not controlling that situation."

"It was a military situation. And that's run by the Pentagon or the CIA or both. She's under orders."