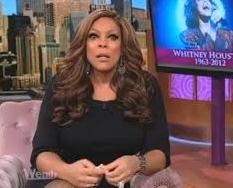 )'s relationship with Tom Hiddleston on Monday's episode of her talk show.

"Taylor Swift and this new boyfriend of hers, Tom Hiddleston, apparently they're getting serious," she said.

"It's only been three weeks, and she's 26. That's old enough to understand... you don't show your feelings on your sleeve in three weeks, you know? And he's a thirty-something."

Williams admitted she wasn't aware of the 'Avengers' star whose stock has risen dramatically over the last few years. But she thought the relationship with the singer was a poly to raise his profile.

"I suspect he's a bit of an opportunist," she said of the 35-year-old.

"I'm going to tell you why: First of all, he wants to be the next James Bond, and he's English. And I suspect — because I'd never heard of this guy before, you see — so how do you drum up votes? By getting on Hot Topics. I'm just saying!"

She also thought their very public PDA is no accident.

"So, Tom and Taylor are right there sitting on the property of her Rhode Island mansion that she owns, which is right next to the Kennedys. Now, you might be wondering why the paparazzi is in Rhode Island, and I say, well No. 1, the Kennedys have been there for years. No. 2, Taylor probably called them."