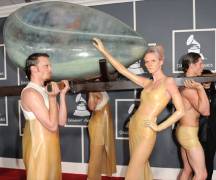 'Weird Al' Yankovic, who is known for humorous songs that make light of pop culture, has parodied Lady Gaga (photos

Gaga has approved the song's release with all proceeds going to the Human Rights Campaign.

"I'm thrilled on many levels to hear this, because I truly respect and admire Gaga as an artist and it pained me to think of her as having less than a great sense of humor, and it means i get to put out my album!"

Check out the song, which might as well be called a parody of Madonna's 'Express Yourself' below: