Wayne Gretzky To Guest Star On 'The Simpsons' in December 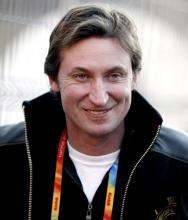 Hockey legend Wayne Gretzky will lend his voice to 'The Simpsons' in an episode set to air next month.

The leading scorer in NHL history surprisingly becomes the first hockey player to appear on the long-running show.

"We reached out to him," says executive producer Al Jean. "We were looking for heroes of the winter like Santa Claus and Jack Frost, and there couldn't be a bigger hockey hero than Wayne Gretzky."

"People argue about a lot of things, but they never argue about who's the greatest hockey player. It's always him. I don't think there is anybody better at anything that Gretzky is as a hockey player. He had a lot of great stories and it was a real pleasure to meet him."

"We have a lot of Canadians on the staff and a lot of hockey fans," explains Jean. "A lot of us grew up in the northern US or Canada."

The episode on this the twenty-eighth season of 'The Simpsons' will air on December 11.