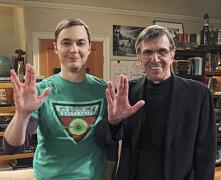 When CBS announced Leonard Nimoy would guest star on 'Big Bang Theory', producers hinted that the actor would lend his Spock voice in the appearance.

But it wasn't clear exactly how the show would fit in the 'Star Trek' character in the story.

Well, a couple of newly released preview clips have made that clear.

It all begins when Penny gifts Sheldon a mint-condition vintage Star Trek transporter from 1975.

But after Sheldon is hesitant about opening the package and destryoing its value, Spock beats Sheldon at his own game of logic.

"We've been chasing Leonard for years, and he finally gave up," says co-creator Chuck Lorre. "We caught him."

'The Transporter Malfunction' airs this Thursday.