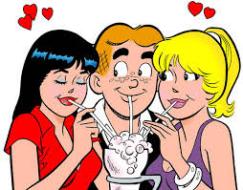 Archie Comics announced on Thursday that the long-running comic's characters will be coming to the big screen.

'Glee' writer Roberto Aguirre-Sacasa will pen the script he describes as "a quintessential teen movie."

"The idea for this is to capture a very truthful, authentic coming-of-age story with these kids that includes heartache, that includes pain, that will obviously temper the fun and the hijinks," he explains.

"It's going to be a fun - hopefully - summer movie, but we're not shying away from the truth and the awkwardness and the growing pains of being a teenager. There are parts of the story that I think people will be surprised how dark and real it gets."

A made for TV film based on the comics, 'Archie: To Riverdale and Back Again', aired on NBC in 1990. However, this is the first time Archie, Betty, Veronica and Jughead will make the jump to the big screen.

Jason Moore, who helmed 'Pitch Perfect', will direct. No release date or casting details have been announced.