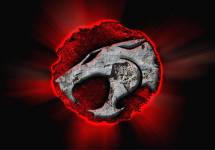 'Thundercats' debuted in 1983 and revolved around a group of humanoid cats who had to flee their planet of Thundera after it was destroyed. Once they crashed on another planet, Third Earth, they had to battle Mumm-Ra, an evil sorcerer, who was bent on killing them off.

Writer Paul Sopocy has provided WB with a script as an origin story expanding on the major heroes and villains from the animated series.

This is another one of the 80s/90s animated series making it to the big screen, after it was recently announced that "He-Man" would also be made into a full length feature.