Vin Diesel's Marvel Talks About 'Guardians of the Galaxy' 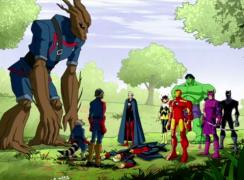 Turns out Vin Diesel's discussions with Marvel were not about a possible role in 'Avengers 2' but rather to voice Groot in 'Guardians of the Galaxy'.

Diesel finally answered the speculation this week in an interview with the Los Angeles Times.

"I'm an actor. I can do whatever the... I want," he said when asked why he wants to voice the talking tree.

"As an actor, not everything has to be the most obvious choice. And sometimes, the best thing you can do — as far as Steven Spielberg and his advice — is to defy expectations."

"So if everybody thinks you're going to go for this one thing and you flip it entirely and go for the strangest Marvel character, it's interesting. And when something is interesting, it's inspiring."

Vin Diesel dropped a major hint about his involvement when he posted a picture of the character on Facebook this past weekend.

"I get inspired by things. So if somebody sends me a book of conceptual art that's the best character design work I've ever seen — I'm not kidding, I see that and I want to be a little cryptic and I want to say something positive. Even if it's as cryptic as an old, dated image of a character."

"The last thing they are is mad," he says of any thought that he defied Marvel. "I'm pretty open, but I have been secretive about this. I went to Comic-Con and I got blasted while I was on the Hall H panel for 'Riddick'. Someone asked a Marvel question. I couldn't say anything because of that secrecy."

'Guardians of the Galaxy' is already half way through production, so is Diesel joining the project too late?

"That's the thing — I'm so busy," he says. "The audience wanted Vin and Marvel, Vin and Marvel. But I'm too busy to do a six-month role. So what Marvel came up with was really interesting. … I am watching a social wave influence and in some ways guide their thinking."

) as Gamora and Dave Bautista as Drax.