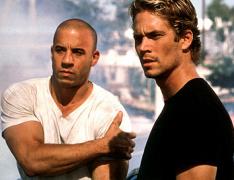 In an appearance 'Live! with Kelly and Michael', Vin Diesel candidly spoke out about what it was like to mourn the death of friend and co-star Paul Walker.

"It's a heavy thing," Diesel said as the tone of the entire show changed in an instant. "I grew up in the bouncer world, and we lost people while we were bouncing. But the brotherhood in Paul Walker was something completely different."

"I've been acting all my life and they don't teach you in acting, how to mourn someone and simultaneously pretend they're in a scene with you," he expressed.

Diesel was obviously referring to the work they did to complete the film with Walker's brothers, Caleb and Cody, stepping in to wrap up 'Fast and Furious 7' months after Paul Walker's death.

Diesel then spoke about how actor's put themselves in harm's way without even comprehending it when starring in an action film.

"If you're on the set with me, you'll hear the grips talk about a stunt. Just a couple of months ago I was doing a stunt and I heard these numbers going around and someone was saying 8-1 and 12-1."

The 40-year-old Walked died in November after a car crash in Santa Clarita, California when the Porsche Carrera GT he was in with friend Roger Rodas collided into a tree, then a light pole, and went up in flames.