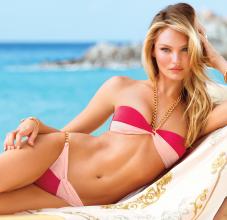 ) is pregnant with her first child.

The model is currently engaged to fiancé Hermann Nicoli, who popped the question last August.

The 27-year-old South African bombshell has been with Nicoli for nearly a decade after they met while she was just 17.

She's been a fixture on the Victoria's Secret runway since 2010. In 2013, she was named the cover model of the coveted Victoria's Secret Swim Catalogue and chosen to wear the $10 million Fantasy Bra, set in 18 carat gold with a 52-carat ruby at the center, in the fashion show.

), who is also expecting her first child with Adam Levine.