Behind Scenes and First Look Teaser For 'Veronica Mars' Movie 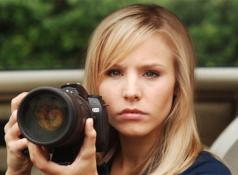 And now fans can finally get their first look at the cast reunited along with a teaser for the fan-funded film.

As for where the film picks off from the television series, creator Rob Thomas says: "I can tell you Veronica has not worked as a private detective since the last time you saw her. Part of this movie is her getting back into this life she thought she left behind."

The entire video is about 5 minutes long. Skip to 3:05 if you want to get straight to the teaser trailer: