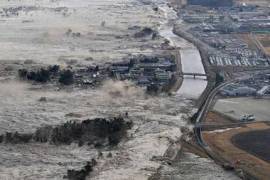 Jimmy Kimmel, who is vacationing in the South Pacific, says officials are evacuating after the magnitude 8.9 earthquake off the coast of Japan

"Suddenly, relaxing on an island in the South Pacific isn't so relaxing anymore," Kimmel said on Twitter following the quake. "Good thing I brought my aqua stilts. I am on an island in French Polynesia, glued to CNN."

After a number of people didn't believe he was really on the islands located 6000 miles from Japan and slammed him for joking about it, Kimmel tried to convince them he was serious.

"Not kidding. That's where I am," he said. "I wish I was joking... and I'll accept the apologies from everyone who called me an a--hole and said 'f--k you' in advance."

"Thanks to those who sent good wishes... this is crazy."

Asked how scared he was on a scale of one to ten, the comedian replied: "A good solid 7 on a small island, with no high ground."

Half an hour later, Kimmel said they were evacuating the island and not to worry if he didn't post in some time.

The earthquake, the fifth strongest tremor worldwide since 1900 and the seventh strongest in history, set a nuclear plant ablaze and unleashed a 10-metre tsunami that tossed ships near Sendai city.

Seismologists say the quake was 160 times more powerful than the one that hit Christchurch last month.